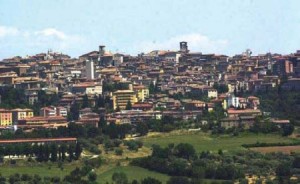 Perugia is a unique example of continuum harmony between the geomorphological features of the area and those of the urban architectural. The city appears organically merged with the hill on which stands, dominate the Valley Tiber and Valle Umbra, and provides evidence of the fertile osmotic relationship between town and country that characterizes the Umbrian landscape. Its name changed several times over the centuries: was called “Eulisteo” named after the legendary founder Euliste, Trojan hero or Etruscan, “Turena“, `for the impregnability of its high turreted walls, “Perusia” (“abundance”, or “passage”, “movement”) and “Peroscia“, but from the Middle Ages to the nineteenth century forwarded its structure remains almost unchanged. Cities of the most important “dodecapoli” Etruscan, was subdued by the Romans for the first time in 295 a.C. and, in a much more incisive, by Octavian (41-40 a.C.), that promoted a series of important works of restoration construction. Besieged by the Goths, Lombards and Byzantines, Perugia knew, since the thirteenth century, a first metamorphosis from inaccessible stronghold in the thriving City of Guelph matrix; urban space begins to expand, start the construction of the cathedral and form new villages, especially in the vicinity of the monastery complex built by the mendicant orders. Be dated from the years big pieces and functional, as `Aqueduct Monte Pacciano or ineffable beauty, such as Fontana Greater. Liberty City is challenged by `papal authority (1370) and by bloody infighting, that let `s rise to power, as turbulent as ephemeral, of various Lordships, including that of the leader Andrea arm Fortebracci, Then the families Beccarini, Piccinini, Oddi and Baglioni, these undisputed protagonists of political life and cultural city in the second half of the fifteenth: Thanks to this potentate the city is enriched with beautiful noble palaces and architectural gems like the bell St. Peter's or the facade of San Bernardino. To sanction the final affirmation of the Papal States, is erected by Pope Paul III Rocca Paolina (1540-43), construction so as to be hated literally razed to the ground by the Perugia between 1848 and 1860, in conjunction with the establishment of the Kingdom of Italy and its annnessione `s Umbria. As of the end of the nineteenth century also occurs in Perugia the phenomenon of expansion and expansion to the outside common to many Umbrian towns in those years.

The city, Today the regional capital of the province and, is an important agricultural center and productive, with companies operating in textile sector, feed, mechanical, construction and confectionery (d `product excellence is of course the chocolate, protagonist of a `acclaimed annual event “Eurochocolate“). Perugia also enjoys the prestige of his two colleges (the `University of Perugia, founded in 1307, and l `University for Foreigners) and the beautiful National Gallery of Umbria `. Indispensable, for experts or enthusiasts of music, `The summer meeting with “Umbria Jazz“.