The articles and television services concern to umbriaccessibile.com

(even) – Perugia, 30 sea. 015 – “The implementation of policies and actions aimed at promoting accessible tourism is the measure of the level of civilization of a community”: it affirmed the Regional Tourism, Fabrizio Bracco, intervening in Perugia this morning at the presentation of the project “Europe without barriers” co-funded by the European Commission. The meeting was attended, over alderman Bracco, all representatives of organizations and institutions that have a role in the realization of the project . Among these: the Head of Tourism of the City of Foligno, John Patriarchs, Marco Pizzio of AISM who oversaw the initiative, Anita Swifts of AISM Umbria, Mirko Apothecaries of Cooperative Services Center Foligno “Umbriaccessibile”, Louis Montagnoli Mountain Community “ACCESSTOUR”, Mario Tosti association Pantera “Zero Barriers”, David Ficola referent for the SEU of Accessible Tourism in the new programming.
Overall objective of the project “Europe without barriers” (EWB) for accessible tourism, provides for the creation in Perugia, Assisi and Foligno, a network of organizations able to design, implement and promote routes accessible for all, considering the needs of people with special needs access.
“In practice – explained – Mirko Apothecaries of Cooperative Services Center Foligno “Umbriaccessibile - we focused on the design and construction of new packages accessible destinations and programming of an organized tour. They will then identified new routes accessible to all, considering each destination part of a puzzle, so that each packet can be either purchased separately or as part of a whole itinerary”.
“Eliminate architectural barriers - reported Marco Pizzio of AISM - it benefits the whole community that tends to have within it a very high proportion of elderly, that is rising. As a result, our project aims to create a model for replication in other territories”.
Marco Pizzio has therefore emphasized the need for travelers to be eligible for accommodation with rooms and accessible areas and not only hotel with a few rooms in a context that is not accessible. It’ fundamental for tourists, find a reality where everything is available starting from services, from the elevators, breakfast room, relaxation area, restaurants, with trained staff and informed, since people with disabilities need special attention. The package will include course, the proposed activities and excursions, as the concept of a vacation accessible should not deal in a structure where everything is accessible, but all in an environment enriched by proposals.
“The Italian projects selected at European level are 5 - Said Councillor Bracco - Of these 2 were presented from Umbria. This makes me proud, because this result is clearly the focus of our region to these central issues which require, for their implementation, a cultural revolution”.
“We must seize the stress that came to us today by Anita Swifts of AISM Umbria, namely, that 'we are all equal in our diversity'. The Region has warned for some time that this need is also a necessity, saw the region for its intrinsic characteristics, especially in town centers, presents difficulties that do not promote accessible tourism”.
Concluding the commissioner Bracco showed that “the ability to travel is a social right, that binds to the right of us all to culture and knowledge. For a region like ours - said - he wants to make tourism a development priority, accessible tourism is one of the fundamental aspects of care to conquer new spaces, with an important economic impact”. 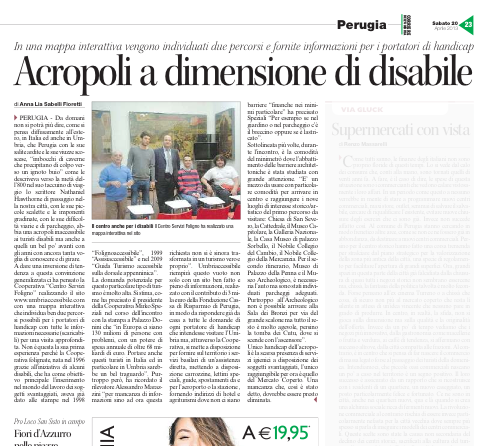