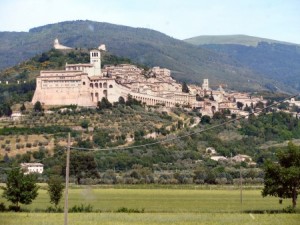 Assisi (424 m, 28000 from.) `represents an exception from the morphological point of view than the other Umbrian towns because it stands on top of a hill but it is lying on a slope of Mount Subasio, dominating campaigns irrigated by rivers Mouse and Chiascio. The sacredness of the place has permeated an urban impervious but ready to explode all the seraphic beauty in his monumental squares Cathedral of San Rufino, of Santa Clara and the City or in the famous complex of Sacred Convent of the Franciscan and Upper Basilicas and Lower. Assisi in the thirteenth century knew only a modest expansion of the `original Roman layout and the construction of the Franciscan Basilica, started in 1228, is placed a little `marginally relative to the center of the village. La figura forte e rivoluzionaria di San Francesco, l `exegesis or the mystification of his work, the `iconography connected with him, have indelibly influenced the course “urbis form” and the perception of the same territory. The foundation of Assisi probably dates from the Hellenistic period and in the Augustan period the city was in a great location, close to fertile valleys and near the Via Flaminia. Ghibelline in the twelfth century, the city was the scene, in the middle decades of the thirteenth century, the mystical lives of St. Francis and St. Clare and the subsequent construction of basilicas entitled to them. The city was later vicissitudes; came under the auspices of Pope Paul III `in the sixteenth century, was sacked by Napoleon's troops and annexed, finally, the United d'Italia.Dichiarata World Heritage byUNESCO The city is now the destination of almost uninterrupted flow of tourists and pilgrims. Among the events typical of the place and the traditional May Day March for Peace.

Parking for the disabled are located in Piazza Unita d'Italy, Piazza San Pietro, Via San Francesco, Via San Paolo, Via San Gabriel `s Sorrow, in Borgo Aretino, Via Santa Maria delle Rose, Piazza Matteotti, New Gate, St. Francis Square, Porta San Giacomo. There are accessible toilets in Piazza Matteotti, Porta Nuova, in Piazza San Francesco, in the Gallery of Palazzo Vallemani mechanized street and path of the Tower. The city has several types of road, from `the brick paved with large tracts consist of cobblestones paved ee. The streets are generally well maintained, although there are often steep slopes. The tour desk is located in Palazzo San Nicolain the Town Square and is accessible for affordable rental.