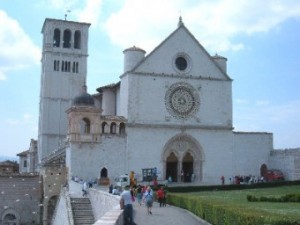 This huge complex, consists of two overlapping bodies that bear witness to different phases of construction and other creative contributions and stylistic, is one of the most extraordinary artistic tributes to Christianity and the Franciscan. The Lower Basilica was erected on the initiative of Brother Elia in 1228, just two years after the death of St. Francis, who had appointed vicar general of the Order of Friars Minor. The sacred remains of the saint were transferred there in 1230, but even in those years was maturing `s idea of ​​creating a double church, two distinct functions that obey: recollection of a mystical, the other one of preaching. The Upper Basilica was elegantly clad forms from the French Gothic and `whole complex was solemnly consecrated by Pope Innocent IV in 1253, but only in 1367, with the construction of the chapel of St. Catherine, The site could be said to be concluded.
The facade, that the Upper Square, is monumental and graceful at the same time, divided by cornices on brackets and ending in a triangular pediment, But its beauty is manifested in full pads and full of rose in double gate: on the left we find the Loggia Blessings and Bell tower, square and Romanesque.
The Lower Basilica has a gorgeous carved portal, the second half of the thirteenth century, preceded by a refined Renaissance porch. The plan is a cross and is a masterpiece of Egyptian blend of Gothic and Romanesque; The nave is divided into five bays by semicircular arches supported by sturdy pillars. The first frescoes (1253 as) paintings in the Basilica are those of the unknown Master of St. Francis covering the walls of the nave and illustrating scenes from the life of Christ and the Holy. The third chapel on the right, the so-called Cappella Maddalena, was entirely frescoed by Giotto and collaborators, immediately after the Scrovegni Chapel in Padua. L `Altar, in the Presbytery, is Gothic arches and decorated with mosaics and columns with floral capitals. Stand out in the vault frescoes depicting the four sails “Franciscan Allegories of the virtues” and “Glory of St. Francis”: these are the paintings attributed to Giotto and the Parent Teacher of Sails. The right arm of the cruise is entirely covered by two large series of frescoes by Giotto and students will also be admired “Madonna and Child Enthroned, Four Angels and St. Francis” Cimabue and a wonderful “Crucifixion”attributed to the creative genius of Giotto himself; the left arm of the transept contains precious frescoes of the Sienese Pietro Lorenzetti (as well as Chapel of St. John the Baptist), while in `apse is proudly displayed a beautiful wooden choir of the fifteenth; the Chapel of St. Martin Instead it is a sounding of the art of calligraphy by Simone Martini `s frescoed between 1312 and 1321.
The interior of the Upper Basilica consists of a single, immense nave of four bays with polygonal apse and transept. The space is sleek, unitary, immersed in the golden light flowing from the outer canopy and the cycle of Giotto frescoes narrating the life of St. Francis is a visual poem of incomparable epic-strong religious tones.
The walls of the apse and the transept are `completely occupied by the paintings made by Cimabue and collaborators from 1277 but the masterpiece is a masterpiece in this case consist of the magnificent series of 28 frescoes that develops along the tunnel and will be an essential reference for all future iconographic interpretations of the life of the Holy. The attribution to the `master of the complex Vespignano work is based on a critical tradition already established at the time of Vasari, but in reality applicants were doubts, `both in nineteenth century than in the, about fatherhood; beyond any reasonable doubt is the revolutionary narrative of this sum Franciscan, both from the iconographic point of view that the concept of space and color.
Behind the apse of the Basilica we find the Museum-Treasury and Perkins Collection, including textiles, paintings and gold of great historical and artistic value.
Source of pictures: Photo www.regione.umbria.it: M. Tortoioli www.fotoeweb.it/umbria/

The path leading from the disabled car park at the entrance of the Lower Basilica, length of about 40 m, has stone paving, with a slope of 6%. At the entrance there is an Information Office (open Monday to Saturday), to access which are 5 steps. The Lower Basilica has two inputs side by side, that have two steps with a show of 18 cm and a tread 135 cm; the entrance on the left can be overcome thanks to a mobile ramp with a slope of 13%. The interior has some of the slopes 4%; The chapels have all of the steps (of 4 a 6) at; Tomb of St. Francis can be reached by three flights of stairs (27 steps) equipped with handrails. Since you get to the Lower Basilica Superiore two different paths: apse behind the altar Papal, where there are two flights of stairs (18 steps) equipped with handrails leading to the cloister and bookshop in the cathedrals and other 3 flights of stairs (34 steps), with handrail on the left, leading to the chancel of the Basilica Superiore, or from the side of the main staircase of the Lower Basilica (49 steps, handrail on the left) Steps leading to the Upper, front of the entrance of the Basilica Superiore. For people in wheelchairs, the only way that one has to reach the Upper Church is to walk along a stretch of road (as 60 m) with a slope of 21% and post about 50 m with acceptable gradients. The Upper Basilica has two inputs, one of which has a riser step 4 cm, kick 25 cm and lift inner step 7 cm ( at times to overcome this difficulty are placed in small wooden ramps). The interior is not difficult to visit; you enter the sanctuary via a ramp with length cm 166 and slope 13% (next to the entrance there are audio guides). The public toilets are located under the lower square, the entrance is in the arcade near the parking reserved for disabled people. It is accessed via 4 flights of stairs, all equipped with handrails on both sides, and an elevator that has a door with clear opening of 90 cm, width 150 cm and depth 150 cm. 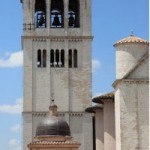 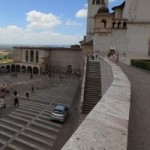 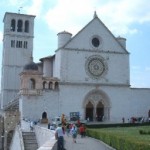 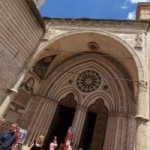