Basilica of St. Mary of the Angels Location : Outskirts of Assisi 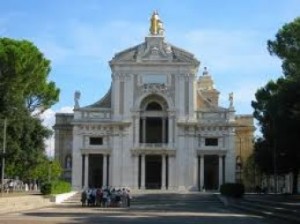 Grandiose and monumental Basilica, around which developed the village of the same name, arose between 1569 and 1679 on the ruins of a Franciscan friary born near the Portiuncula, the small church where St. Francis used to retire in prayer and become, right now, an indispensable setting of Franciscan spirituality: is here, in fact, that originated the first Franciscan settlement and St. Clare took vows. The Basilica was erected by Pope Pius V (1566-1572) to guard, just, the Portiuncula, where the saint more clearly understood his vocation and obtained the `plenary indulgence for pilgrims who had passed with a repentant heart, after completing the prayer through the sacraments of communion and reconciliation with Christ. In this place, then founded the `Order of Friars Minor in 1209. Portiuncula Monastery – Square Portiuncula, 1 – 06081 St. Mary of the Angels (PG) Such. (+39) 075.8051430 – Fax: (+39) 075.8051418 – info@porziuncola.org In addition to the Portiuncula of immense artistic value are the spiritual Chapel of the Transit, where the poor man died 3 October 1226 and Rose garden, among the thorns that one night St. Francis rolled to overcome doubt and the temptation of the flesh. According to a tradition, passed since the end of the thirteenth century, the brambles, in contact with the skin of the Holy, dropped, giving rise to all the plugs “rosehip of Assisi”.
The Museum's Shrine of the Portiuncula is situated at the interior of the Basilica and has two major paintings dating from the first century Franciscan, counted among the masterpieces of Italian medieval: a rare Crucifix by Giunta Pisano and signed a `anonymous icon depicting St. Francis attributed to a thirteenth-century Umbrian painter.
Source of pictures: Photo www.regione.umbria.it: M. Tortoioli

The parking lot adjacent to the Basilica is flat and has few parking spaces for visitors with disabilities. The first section has the asphalt and the path that leads to the entrance hall has a floor paved with slabs of stone slightly bumpy and a ramp, cm in length 540 and slope of 8%; to follow are two very short ramps, a length of cm 83 cm and the other one 45, detected above the entrance to the left side of the Basilica, similar to the Right, and provided with a door with net light cm 94. The structure is placed on the flat and has no difficulty in visiting people in wheelchairs. Inside one enters a path that leads to the Rose Garden through a double door to door with clear opening of cm 60, while from the Rose Garden Avenue Entries Announced, from where it continues towards the exit, the floor is brick and downhill, cm in length 260 and slope 12%. The public toilets are located in mid-, between the parking and the Basilica, and two of them are reserved for persons with disabilities; their internal dimensions are sufficient to allow for easier use by people in wheelchairs, the water have a 'raised from the floor of cm 50 and are equipped with handles on either side of `support. Every Sunday at Mass hours 17 There is a sign language interpreter is available for visits and guidance enabled to communicate with deaf people. Restrict access to animals. The museum is on two floors, served by 3 flights of stairs with handrails provided on the right and an elevator door with clear opening of 90 cm, width 140 cm and depth 150 cm. On the ground floor there are the ticket office and 5 exhibition halls; to access one of the rooms there is a step with a show of 11 cm, avoided passing through the room where it is exposed to the Crucifix by Giunta Pisano, connected to the other via a short pavement long 130 cm and a slope of 8%. The floors of exhibitors that contain drawings of the Basilica and the Portiuncula are placed at a height of 100 cm and results in difficulties for the vision. Upstairs you can visit the ancient century convent, reconstructed in 1926, access to which has a passage clearances of 67 cm. The toilet is located on the ground floor and is accessible to disabled. 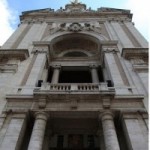 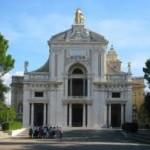 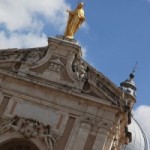 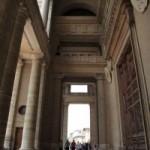