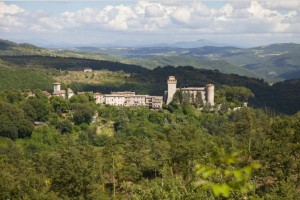 Orvieto (325 m, 21.053 from.) is another great example of harmonious coexistence between urban settlements and natural habitat, between the imposing platform of tufa, originated from volcanic sediment, and the organism urban to it above, full of priceless historical and artistic beauties.

L `Etruscan Velzna, Orvieto which is now identified, was probably a strategic border town, nodal point of a network of roads that stretched from the Tyrrhenian to Padania, and had, `between the eighth and seventh centuries BC, considerable economic and demographic development ( remains to prove the necropolis discovered in recent years) but the bloody strife it caused the premature fall and the subsequent invasion by the Roman armies (264 a. C.).
The Romans literally razed to the ground the city and forced the few people who survived the massacre to move on the banks of the nearby Lago di Bolsena, where resources Volsinii Novemberi; the community was then forced to another forced relocation when these rich territories were again looted, this time by the Barbarians (Sixth century.), and reformed the old urban structure on the cliff of Orvieto, as the Urbs Vetus (“old town”).
During the thirteenth century Orvieto consolidated his power and autonomy to the point of governing, through the institutions typical of a free city, a vast territory, divided into 34 plovers and castles; a city-state that wanted to express his prestige through a series of important urban and architectural (the restoration of the Town Hall, the construction of the Cathedral, of Papal Palace and the People's Palace).
After the orbit of the Papal States after the advent of the lords and the devastating Black Death, Orvieto experienced another urban renewal in the sixteenth century.
Enriched by the neoclassical architecture of Vespignani and Valadier in the nineteenth century, the city has experienced, over the last few years, phenomena of sprawl urban valley, across the river Straw (right tributary of the Tiber).
Orvieto is resort, agricultural market (cereals, vegetable, wine, oil, tobacco) and industrial center, that operates in the food, mechanical, chemical and manufacturing; characteristic is, then, the production of handmade beautiful artistic ceramics.
City of Orvieto Via Garibaldi, 8 05018 – Orvieto (Tr) such. 0763 3061