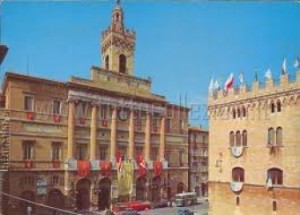 Located in Republic Square, in front of the Cathedral of San Feliciano. The structure is a restructuring of previous public buildings built from the thirteenth century, Podesta, Priors and the Captain of the People, restored for the first time already in the twenties of the fifteenth; the subsequent restructuring of the sixteenth-century palaces of the Priors and the Captain led to the unification of the two separate structures into a single body that forms the current Town Hall. Another intervention phase between the 1546 and 1565, architect Scarscioni, and, yet, between 1629 and 1642. Renovations to the facade were necessary following the earthquake 1832: between 1835 and 1838 was built in the neoclassical colonnade that gives life to the current prospectus, designed by architect Antonio Mollari Macerata and performed by Francis Woods Perugia.

The current neoclassical appearance is characterized by two lateral sides and a central front building where, five arches, rest a parapet in travertine and six Ionic columns that support the coping with the engraving SPQF. (Urban Fulginei). At the top stands the crenellated tower of the Middle Ages, strongly altered over the various restorations, especially in the sixteenth century in its upper part, surmounted by a lantern that culminates with the symbol Foligno: Giglio. The collapse of the structure of the apical tower, the famous "turret" of the Town Hall, has become the symbol of the city shaken by earthquake 1997.

The clock that is currently on the façade dates back to 1909 and was manufactured by Cesare Fontana in Milan .

As regards the Interior, on the walls of the 'days see two tombstones, placed by the City in 1612, in which were engraved the main linear measurements taken in Foligno. In courtyard you can admire the well-century whose true is an inscription that recalls the names of the six priori that composed the Municipal Magistrate of two months from September to October 1567.

In mezzanine is placed the painting of the Madonna of the Veil (Sixteenth century).

To the first floor, conch in the window that is at the end of the stairs, three pictures painted by a fake architecture: San Feliciano left, Blessed Peter Crisci to right and up a dove, symbol of the Holy Spirit.

On the same floor is the main door to the hall of the City Council, above which stands the inscription: PVB. CO CORDIA Oran (nothing is more useful to the public concord).

The paintings of City Council Hall, executed between 1883 and 1887, are the work of Mariano Piervittori (1815 – 1888). At the center of the pavilion vault are four female figures, allegories of Wisdom triumphant, of Strength, of Prudence, of Justice. Fra le vele, allegories of Arts, Science and Technology. Among these twelve female figures deserves a separate mention the History, as it is portrayed with a scroll in his hand, in which are written the name of the client and the date of decoration of the vault. The underlying lunettes, portraits, within medallions, sixteen illustrious Foligno (Gentile da Fabriano, Ugolino and Corrado Trinci, Niccolo Pupil, Pierantonio Mezzastris, Emiliano Orfini, Petronio Men, Sigismondo of Earl, Francesco Jacobilli, Viviano Cirocchi, Ludwig Jacobilli, Francesco Fulginei, Sante Ferroni, Feliciano Scarpellini, Catherine Scarpellini, Antonio Rutili Gentili). On the walls, by rich tapestries, three great historical paintings: on the north wall, The arrival of Frederick II youth in Foligno (1198); on the short wall facing The Foligno Count Robbacastelli elected by the Milanese general rejects the bridge of Cassano d'Adda the army of Frederick Barbarossa (1158),episode from the Compendium of the History of Foligno's Bragazzi; on the long wall The death of Colomba Antonietti, the 13 June 1849, on the walls of San Pancrazio, in Rome, fighting against the French in the defense of the Republic Rowhat.

From the loggia leads to the rooms used as municipal offices.

To the left of the vestibule open the so-called salt landscapes, three rooms placed one after the other, forming a core in itself inside the Palace.

Along the gallery, opens to the right Armory, so called because on top of the walls and the ceiling are represented weapons or the arms of the noble families of Foligno,supplemented by cartouches in which is written the name. At the center of the vault stands the lily symbol of the city of Foligno. The work was commissioned by the abbot Alessandro Barnabò in 1760 an author remained unknown.

Adjacent to that of arms is theHall of Arts and Crafts, from Red Room, which currently represents an allegory of Progress and Labour made in 1947 Ugo Scaramucci. Previously had been decorated by Welcome Crispoldi who had painted in the sails allegories entitled: Beauty of life, Marriage, Family, Patrit, jobs destroyed during the bombing of 1944.