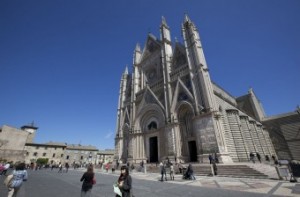 The construction of this immortal masterpiece of architecture (entitled to St. Mary's Assumption into Heaven) it started around the 1290, based on a project critical historiography in the past attributed to Arnolfo di Cambio and now is rather more uncertain attribution; was first erected a vast space, transept, naves separated by arches and apses on the longitudinal sides, revealed that a plant is difficult to categorize the original style.
Around the first decade of the 1300 is the date the intervention of architect and sculptor Lorenzo Maitani of Siena, which operates a consolidation of the masonry structure built by six buttresses, to support the vault of the transept; Siena is also responsible for the wonderful facade, unreachable point of fusion between architecture and decorative art, all played on `geometric balance between horizontal and vertical lines and beautifully illuminated by inserting` bright mosaics.
The three richest portals are supported by pillars covered with marble slabs carved in relief, that create these `too sophisticated color and chiaroscuro effects; are deployed with a marked trend narrative, between branches of acanthus `, Scenes of `Old Testament, Messianic Prophecies, the Crucifixion, Scene Evangelical, the Judgement and Resurrection of the Flesh. The details of the specious realism, il frequent use of the knot, `the great freedom of composition and attention to chiaroscuro values ​​makes it rather difficult the timing of this cycle and its antecedents (Perugia, Sienese and French).
The façade was then completed to the eighth decade of the fourteenth century `, with the splendid rosette Andrea di Cione Orcagna called the `, the intervention of the mosaic, and Andrea Pisano sculpture for the sequence of the upper.
L `internal is a basilica, a tre navate, divided by ten columns and two pilasters with capitals lush, and is full of light, majestic and solemn.
To visit, tra le tante gemme dischiuse dal Cathedral, the Chapel of San Brizio, built by the middle of the fifteenth, Boasting an extraordinary cycle of frescoes, among the masterpieces of Italian painting, works by Fra Angelico (1447-49) and Luca Signorelli (1499-1504) – elegant calligraphy and the first, Plastic and dramatic second – and Chapel of the Corporal, where is the extraordinary Reliquary Sienese goldsmith Ugolino made from `Vieri for the corporal of the guard “Miracle of Bolsena”, which binds of the origins of the cathedral Orvieto.
Source of pictures: Photo www.regione.umbria.it:M. Tortoioli

At present there are no data received on the accessibility of the structure. 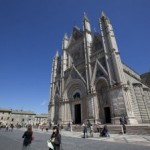 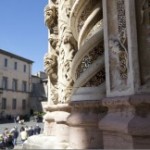 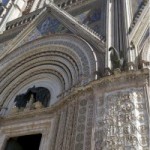 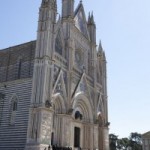