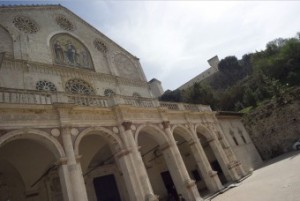 The building, located in the scenic setting of Piazza del Duomo, was built in the Romanesque style around the end of the twelfth century on the ancient Cathedral of Santa Maria in Bishop, was officially consecrated by Pope Innocent III in 1198.
The facciata is a masterpiece of Romanesque architecture in Umbria, divided into three horizontal bands: the frames is below a magnificent portal preceded by a Renaissance portico, the median has a large rose window, surrounded by the symbols of “Four Evangelists” and four smaller rosettes, the superior, crowning triangular, has three rosettes – opera, like other, Umbrian Romanesque marble workers of the second half of the twelfth century – and three pointed arches, whose median framing the beautiful Mosaic thirteenth (“Blessing Christ between the Virgin and St. John”) signed Solsterno. On the left stands a robust bell tower, built in the twelfth century with materials of bare Roman, Early Christian and early medieval.
L `internal, Romanesque, Latin cross with three naves, was rebuilt in the early seventeenth century by Luigi Arrigucci that gave a monumental Baroque; along the right aisle is opened Chapel Eroli, with frescoes by Pinturicchio, while the prebiterio has the widest apse semicircular decorated by wonderful frescoes with “Stories of the Virgin” Filippo Lippi (1467-1469).
To the inside of Chapel of the Holy Icons houses the small table which tradition says was donated by Frederick Barbarossa to the city as a sign of peace and the rare Cross painted by Alberto Sotio (1187).
Source of pictures: Photo www.regione.umbria.it: M. Tortoioli

Accessible through a platform located on the right side of the churchyard. 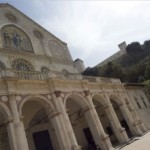 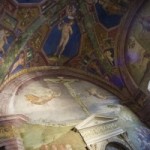 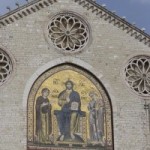 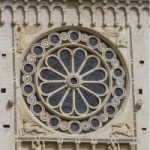 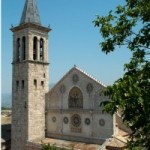