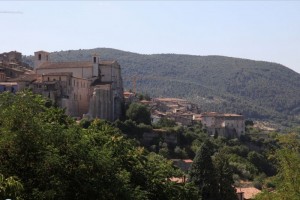 City whose origins are lost in the mists of time, Narni (240 m, 20.385 from.), on the border between Umbria and Lazio, it has always been strategically important road junction. L `urban settlement developed in a slightly irregular, due to the high place on which is impervious and subsequent stages of formation.

Built on a cliff near the throat of the Black, the Roman colony Narnia was built over a previous installation and set up immediately a must see along the route of the Via Flaminia; the subsequent phase of urbanization medieval drew an irregular, centered on Cathedral (XII century).
Narni enjoyed a period of great political and economic expansion starting from the XI century- and this resulted in the construction of admirable public and religious buildings – interrupted only by the enslavement ` State of Chiesa and the construction of the `nth` Rock desired by Card. Albornoz. (1367-68).
Narni had its annus horribilis in 1527, when it underwent ALSO `the Sack of Landsknecht, which caused irreparable damage and trauma from which the city would recover with difficulty.
Nineteenth and twentieth centuries, there were no significant changes to the inside of the old town, but begins to form, north of the Black River, is important to the industrial agglomeration of Narni Scalo.
Parking: follow the signs to Parking + Elevators to get to the outdoor parking fee, where there are reserved parking places but there is ample space, and the parking is free of charge with two reserved seats on the lower floor and two on the upper. In the corner of the Piazza Marconi Town Hall there are three places reserved, There are also two seats reserved in Piazza Garibaldi in front of the fountain.
Public toilets: in the parking inside there is an accessible toilet facilities and (ask for the keys to the cash). There is also a toilet under the Rocca Albornoz,
Paving: the road leading to the Church of San Francesco is cobblestones, such as the section on a steep slope that leads to the Porta Romana, many traits are paved, However, there are also lots of steps.
Tourist Desk: in Via dei Priori, 3 for information call. 0744.715362
Signs blind: not present, However, the panel of the second lift has Braille signage.