Art and monuments in Gubbio 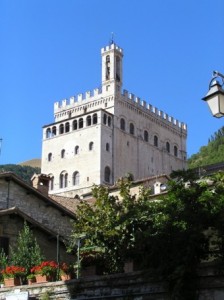 Art Gallery and Museum of Archaeology at the Palazzo dei Consoli, characterized by an impressive external staircase and other internal, However, thanks in part to an accessible entrance under the stairs outside and a small internal lift. Constructed between 1332 and 1338 designed by Angelo Orvieto is one of the most beautiful public buildings in Italy. The collection arranged on different planes illustrates the history and local culture from the sec. The VI century. XIX, Tables of Gubbio aforementioned engraved with the most important text in the Umbrian language and the most extensive description of ancient religious rites that the West has never returned. You can also see the collection of coins, ceramics and the upper floors, which are accessible by lift, you enter the gallery full of paintings mainly of the Umbrian school. For information: such. 075 9274298.

Piazza Grande, fully accessible to the plan as the road. The eastern part of the substructure, fourteenth-century, is divided into four two-storey, whose facades, overlooking Via Baldassini, are quite similar to those of medieval Gubbio homes. The western part was built in the ninth decade of the century. XV by Master Baptist Franceschino by Perugia. It consists of four major areas covered with a barrel vault facing the street; "The arches" were never made entirely. Library in Via Cairoli is also available as the plan of the road and is provided inside an elevator. Teatro Comunale Via del Popolo is accessible as the road plan, limited to the audience, representations only.

Teatro Romano Via del Teatro in the plain in front of the historic city center. Built in the late first century. a.C. now home to a qualified summer season of classical plays. It is accessible as the road plan, The main difficulty is due to the narrow access roads and even in the presence of some stretches of gravel, recommend the presence of the companion. Nearby is a large car park with spaces reserved for disabled. Domus Romana Guastuglia `s archaeological site of Guastuglia, near the Roman Theatre, includes an entire section of Roman times with a luxurious and impressive building, probably a villa, paved with fine mosaics. Accessible with assistance. To access information for the arena: such. 075.9220992. Mausoleum of "Pomponius Grecino" Beniamino Ubaldi of it being, Roman funerary monument, traditionally identified with that of prefect Pomponius Grecino Iguvium, remains only the large outer drum. The burial chamber consists of a square-shaped room covered with a barrel vault. Dating from the first century. a.C. is accessible to the disabled because the road plan.

The Gorge Bottaccione: will emerge sedimentary rocks deposited on the bottom of an ancient sea 140 a 30 million years ago. Accessible as the road plan.

Cathedral born of an earlier Romanesque church dates from 1200 and 1300, the interior has a single nave and is rich in paintings by artists of the sixteenth century Gubbio including Gift Gifts. Very significant is the beautiful baroque chapel with a beautiful painting of Gherardi's "Birth of the Virgin". Beneath the altar is a sarcophagus with the relics of Saints. James and Marian to which the Church is dedicated. Partially accessible from a side passage, by way of Federico da Montefeltro.

Palace of the Canons: home of the Diocesan Museum where you can visit the art collection that traces the long history of the diocese of Gubbio. On the ground floor there is a huge barrel of the Canons of well-century container 193,50 hectoliters of capacity. The archaeological section houses finds from the Roman and early medieval, while the adjacent rooms have paintings of the thirteenth and fourteenth, including the splendid tables dell'eugubino Mello. To reach the museum you can take the elevator after passing a small step, out of the elevator there is a ramp leading to the entrance of the museum where there is another small step. Inside an elevator can reach the various levels with the exception of the cellars. At the entrance there is an accessible toilet, for which you have to ask at the ticket keys. With an elevator inside the museum you can also access the Hanging Gardens, which is a terrace with panoramic views of the Palazzo dei Consoli and the roofs of buildings Gubbio, suitable place to stop for the presence of a kiosk with outdoor tables available.

Palazzo Ducale: stands in front of the cathedral is accessible as the road plan, limited to the courtyard, that opens into the building and that was prior to the Piazza del Comune, and the ground floor where the rooms have fireplaces and other architectural features preserved and where temporary exhibitions are. Church of Sant `Agostino: dates from the thirteenth century. To see the beautiful "Jesus and the Samaritan woman" of Virgil Nucci (1580), "Our Lady of Grace" by Ottaviano Nelli , "Baptism of Saint Augustine" by Felice Damiani and the "Last Judgement" of the fifteenth Salimbeni. Accessible at street level, on a Roman port. On the left side of the facade, going through a small double step, leads to the cloister where there is permanent Nativity.

Church of St Peter, belonged to the Benedictine Cassinese, and then to then to Olivetan Camaldolese. The interior is decorated with the organ and John Maffei's Antonio 1980. The chapels are preserved several important paintings and frescoes among which those of Nucci. Accessible at street level, St. Peter's Square. Church of San Segundo was presumably built in the fifth century. d.C. and its interior was restored only in 1700. Significant: the altar of 1843 and the 'ancient apse of Gothic. Accessible at street level, via Tifernate. Church of Our Lady of the Meadow being built in Perugia 1662 is in Baroque style by Borromini. The architecture is due all'eugubino Carlo Perugini. Difficult access due to the presence of external steps, but small, recommended that the presence of a companion. Church of Santa Maria della Piaggiola, Piaggiola of being built in the seventeenth century also has some beautiful inside and stucco dell'Allegrucci Caminone Francis and the brothers from Pesaro Guidangeli. Difficult access due to the presence of small steps outside the presence of the companion is recommended.

Church of Victorina by way of Victorina is the famous church where St. Francis probably met the wolf of Gubbio. The interior is completely painted, the ceiling is the school of the sixteenth century Gubbio with "stories of the Virgin", the side walls are frescoes of votive 1500. Other paintings are in the side chapel with "stories of St. Francis"(1639) and "Madonna and Child with Saints" both of Baldassini. The church is accessible as the road plan. Basilica di Sant 'Ubaldo: is located at a height of 827 meters, is accessible by car 5 km to the north along the road to Gubbio and Scheggia and dominates the valley. The Basilica houses the famous candles in Gubbio. The interior has five aisles, Cloister, Also inside the urn on the altar you can see the whole body of the patron St. Ubaldo. The church is accessible, but to reach it because the car is almost at the top of Mount Ingino, recommended guide. In the nearby hill is also a fully equipped picnic.

Church of St. Francis with the majestic convent in Piazza San Francesco, access must pass a small step and then the inside is flat. The Square has a paved road with parking and easy disabled access. Inside you can see the apse of the left "Scenes from the Life of Mary" by Ottaviano Nelli (1408-1413), that with the cycle are the work of St. Augustine's most prestigious artist of Gubbio. On the right side of the apse of the right leads to the sacristy, and thence to the Cloister of the Peace (Fourteenth century). To be reported outside the public garden with benches, located to the left of the church and an accessible toilet in the parking lot of the big square.

Fountain of the Fool: the end of Via dei Consoli. One of the most famous fountains of Italy, dates from the sixteenth. It is located just before entering the cabinet Piazza dei Consoli. Only by turning three times around this fountain you purchase an honorary citizen of Gubbio, that is, the license to be crazy. The fountain has no particular aesthetic characteristics.

Images courtesy of the IAT and the city of Gubbio

The data on the accessibility of the individual structures are shown in the general description of the various monuments. 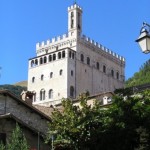 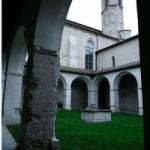 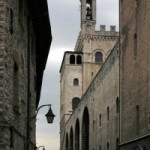