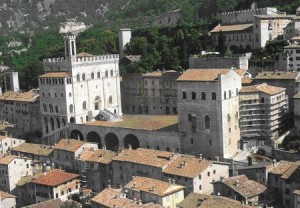 The city was an important center of the Umbrian, “gens antiquissima italiae”, as shown by the Tables of Gubbio (III-I sec. a.C.), the most remarkable relic of pre-Roman epigraphy. The seven bronze tables are valuable because they provide information on sort of the `city-state iguvina, singular as well as reporting requirements to be observed during special ceremonies and provide a detailed overview of the urban structure of the ancient “Ikuvium”, that for centuries has kept virtually intact medieval `s so much in the structure of the buildings in the facilities of roads. In the Roman period begins on the phenomenon of expansion into the countryside below, bounded by “border” constituted by the splendid Theatre, and further, after many devastations caused by the Barbarians, the city becomes a focal point of “Byzantine corridor” Ravenna-Rome.
Under the guidance of the holy bishop Ubaldo Baldassini (1130-1160) begins the flourishing period of Gubbio powerful City-State, which consolidates and extends its hegemony on its territory to the detriment of the neighboring Marche; consequently is the subject of a deep phase of urban renewal that modifies the appearance, both from the point of view and from that building architectural, and a subdivision into four districts (San Martino, San Giuliano, St. Andrew and St. Peter's). After the municipal, of which remains valuable evidence in Palazzo dei Consoli and in Palazzo del Podesta, the city passed, in 1384, the Montefeltro of Urbino, that build on Palazzo Ducale (sumptuous expression of Renaissance architecture), and subsequently to the Della Rovere, to G annexed to the Papal.
Fundamental contribution to the charm of Gubbio are the established values ​​of craftsmanship of pottery, wrought iron, of violin making, Skin and plaster; rare and precious is certainly the white truffle, excellent food in the city.
Parking: Reserved parking in the large square 40 Martyrs, other near the Roman Theatre and across from the Abbey of Sant `Ubaldo. Along the center there are other car parks reserved for disabled people to the inside of the parking fee. Dedicated space is also located in the square outside the Church of Sant Agostino in via Porta Romana.
Public Restrooms: in Piazza San Giovanni and in the parking lot in front of the Church of St. Francis.
Pavimentazionand: there are steep slopes served by lifts and a few flat terraces and squares. The lower part is easier.
Tourist Desk: is located in Via della Repubblica to the left and is accessible to all. Winter Hours (from October to March): 8.30-14/15-18. Summer Hours: 8.30-14/15.30-18.30; Saturday, 9-13, Sunday 9.30-12.30. Such. 075.9220693.
Signage for the blind: not present. Braille signs to the inside of the elevators, beeper and keys depressed.
City of Gubbio – Piazza Grande, 9 – 06024 Such 075 92371 – Fax 075 9275378
Tourist Information Office of the district Eugubino-High Chiasco
Via the Republic, 15 – 06024 Gubbio
Such. 0759220693 – Fax 0759273409
info@iat.gubbio.pg.it
[mappress mapid =”70″]