You can park in the large square 40 Martyrs at the foot of the city, located in front of the Lodges of Shooters, on the left of which is the Church of St. Mary of the Laity, both non-public. To the right of the lodges take the uphill path of Republic, where on the left is the Tourist Information Office is accessible to all. After a few tens of meters is on the left Piazza San Giovanni with the homonymous church, near which there are public toilets, must be accessible for those asking the key tourist information office. Continuing the ascent of the Via della Repubblica is located right on Corso Garibaldi, the end of which is located on the left Holy Trinity Church (not open to the public). Shortly before this can be switched down to the right by Armanni, down to an Church of St Peter, accessible as the road plan. Going back by turning on the right behind the church is located on Fonte Avellana and crossing the bridge over the river turn left onto Cavarello way Cavarello, climbing up to the Church of St. Augustine in the Via di Porta Romana, access road is level. From the church to return to the initial path through Port of Sant ' Augustine and taking a right on Via Dante, After a left curve on the right is the Church of Santa Maria Nuova, not open to the public. We then proceed by way of Savelli until reaching the port Church of St. Francis of Peace, also not open to the public. A few tens of meters along the road, by continuing Savelli, there are three alternatives:
First option: on the left you can descend again on the republic, back at the beginning of the trail and parking.
Second option: go straight on Baldassini, walking under Palazzo del Podesta, Piazza Grande and the Palazzo dei Consoli on the right and along the Casa di Sant'Ubaldo on the left, It even Palace of Bargello, not open to the public. Cross the river and reach the Piazza Camignano G. Bruno with Church of San Domenico which has a staircase entrance. Almost opposite the church, Via Cavour, is Building Me, externally observable as a private residence. Continuing down Via Cavour returns to the parking lot of the square 40 Martyrs, where the Church of St. Francis. To note the public garden with benches, located to the left of the church.
Third Option: take the elevator to the right, under Palazzo del Podesta, just before crossing the path of the republic. The elevator leads to Via XX Settembre, from which we arrive at Piazza Grande, accessible to the street plan and panoramic viewpoint overlooking the city and the small valley below us where on the left is the Palazzo del Podesta, based comunale, and to the right Palazzo dei Consoli headquarters Civic Museum, characterized by an impressive external staircase and other internal, However, thanks in part to an accessible entrance under the stairs outside and a small internal lift. From the Piazza Grande you can go back to the elevator to go up in Via XX Settembre street Federico da Montefeltro, where is the entrance to Palace of the Canons based access Diocesan Museum. Once visited back entrance can also access the Cathedral of Saints James and Mariano, accessible with difficulty because of some steps. Near the cathedral is open to the Palazzo Ducale limited access to the courtyard, which opens in the palace, as the plan of the road. At this point you can return to the elevator or for the more adventurous take a fascinating historical-naturalistic Palazzo Ducale, by way of the Cathedral, leads to the park Ranghiasci, Then coming to the ancient medieval walls and from there, passing under the gate you arrive at the Holy Cross Church of Santa Croce della Foce, But that presents a staircase outside. Going back and recrossing the gate go straight by Gabrielli, then via N. Benefits, until you reach the square G. Bruno at the Church of San Domenico, thus continuing to option two above-mentioned.

The data on the accessibility of the sites are listed in the description of routes. 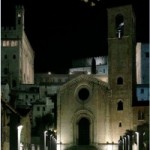 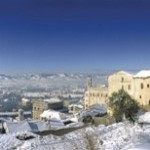