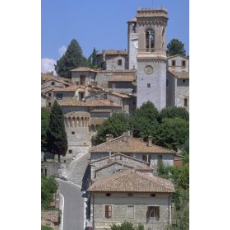 Corciano (m 408 from 18490) far 12 km from the regional capital, stands on a hill covered with olive trees and, thanks to its artistic and natural beauty, è stato inserito nella lista dei Most Beautiful Villages d'Italy. The territory brought to light, in the nineteenth century, la tomba etrusca dei “Bronze chariot“, the dating of which is likely to be placed in the middle of the sixth century BC. The “castrum Corciano” fu confermato come proprietà del Vescovo di Perugia da parte di Potato Innocent II in 1136 and, to confirm the allegiance which bound the two cities, The Corcianese fought alongside against Perugia Todi in 1310.

In 1364 The castle was stormed by the papal legate Albornoz, and, 50 years later, the famous condottiere Braccio da Ram, which opposed Corcianese, however, a valiant resistance; then entered the city in the area of ​​influence of the ` State of the Church, becoming a fief of the Dukes of Corgna, fino a confluire, in 1860, in Kingdom of Italy.
A powerful ring of fifteenth century walls, dotted with towers and surviving with only one port (“Santa Maria“), contains the `old “castrum” and its complicated medieval alleys of Intrigue, lanes, buildings, towers and churches.
To visit the Town Hall, the Palazzo del Capitano del Popolo, the Building Priors, the Parish Church of Santa Maria Assunta (che custodisce opere di benedetto Bonfigli e del Perugino), the Church Museum of San Francisco and the beautiful Gothic church of Sant `Agostino; near the Etruscan necropolis of Strozzacapponi and the majestic Castle of Pieve Veslair.
The landscape, tipico esempio di “Mediterranean”, is full of greenery and dense forest areas.
August `s Corcianese event is a very interesting program which includes exhibitions of art and craft, concerts, theater, in addition to the parade of the Banner.
At Christmas the village gives birth to a beautiful Crib.
UFF. TOURIST INFO
Via Cornaletto, 4/C 06073 Corciano