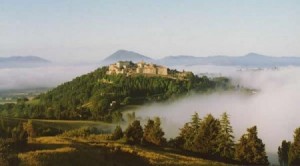 Ram (482 m, 1.648 from) is a splendid medieval village – placed among the most beautiful villages in Italy – built at the top of a hill overlooking the confluence of the rivers Tiber and Carpina. Its elliptical shape follows the course of the two prominences, on which lie north and south of the Franciscan Convent Rock of Arm. The country is locked inside the walls, along which are three doors (del Verziere, of the Old Village and Mount), that correspond to the districts in which the Government of the castle was divided.

The city was the birthplace of Andrea Fortebracci, one of the most famous captains of fortune, more known with the name of Braccio da Montone (1368-1424). After his death, and after various vicissitudes, Montone was subject to the dominion of the Church. Returned to an independent town until the birth of the Kingdom of Italy (1860). Montone is to visit by car or with a guide taking into consideration the shape of medieval.
Parking: Via Borgo Vecchio, in the square of Santa Caterina and Via dello Sport.
Public toilets: only when the events are positioned the cab of chemical toilets.
Paving: relatively easy, but with steep slopes. We recommend that the accompanying.
Tourist Desk: you can directly call the town to get tourist information, to the number 075.9307019.
Signage for the blind: not present.