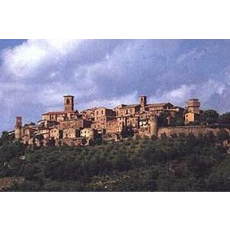 Collazzone (3416 from, 469 m) is another wonderful example of Umbrian village, surrounded by its castle walls and surrounded by a landscape rich in flora and fauna species and soft green slopes of olive groves.

The name is linked to a mysterious character, “Atto” the “Azzone“, who established his rule here with the help of Duchy of Spoleto. Sottrattasi influence of Spoleto, Collazzone was then constant object of the aims of Todi, that razed several times between 1220 and 1271; then passed to Baglioni of Perugia, was fortified by these straight up to the 1647, when it became part of the Papal. From 1808 to the 1814 was ruled by the French and, with Restorationistand, became free Common, condition that persisted until the annexation to Kingdom of Italy.

One of its most famous citizens is the Blessed Simon, devout Franciscan, sent by the Holy One of Assisi in Germany as a minister of the order, and buried in the homonymous monastery in Spoleto 1250.

To see the Town Hall, with portal attributed to Vignola and the coat of arms of Bishop Angelo Cesi, the intact muraria tape medioevale, which offers one of the best views Umbrian, the parish San Lorenzo, that keeps inside a polychrome wooden sculpture depicting the Madonna and Child, one of the most outstanding examples of Umbrian art of the thirteenth century and the Monastery of San Lorenzo that, according to a vulgate tradition, would have received Jacopone of Todi on the eve of his death.

At present there are no data yet received regarding the accessibility of sites of historical, artistic and naturalistic.