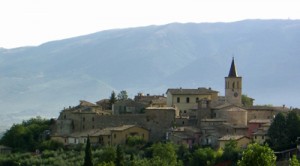 For those who want to organize trips to places in Umbria fairytale Castel Ritaldi (m 297 from 3177) Castle is a characteristic of almost circular, probably built as a “vicus” romano lungo il percorso che da Spoleto leads to Montefalco. Nestled in a gentle and soothing countryside Castle, recently restaurato, presents some parts accessible with ramps; we recommend, however, `s guide to overcome some barriers that make it difficult to visit the entire complex.

In Parish you can see a “Our Lady of Mercy” attributed to Niccolò Lattanzio (1509) and, the right niche in the chancel of the old, “The Eternal Father, The Virgin, Angels and Saints” Tiberius d`Assisi (1512). Other notable monuments are The Church of S. Nicholas, with portal 1486 and inside of a fresco of the Spanish school, and Church of S. Quirico, where it was found the Lex Spolentina (the Lex Lucario) prohibiting the cutting down of trees in a sacred grove dedicated to Zeus, roman age now in the Civic Museum of Spoleto.
In the North it is remarkable Parish Church of St. Gregory, building of the twelfth century with a splendid portal and a beautiful rose in the bell tower.
Events:
Ghost Palio, scolge costume party that during the last week of July mainly in Santa Marina Square. The square in a level location is wheelchair accessible in a wheelchair and was recently restored: therefore presents no barrier.
Tales of the Country: essay contest to be held in September in Piazza Santa Marina and the Amphitheatre; it is accessible and it can be reached via a walkway that has a slight slope.
Frantotipico is a market of oil mill set up the month of November in the Castle of the Marquis Hill, a small fraction of Castel Ritaldi. To access it requires the presence of the companion to overcome some barriers such as steep slopes and steps.
Currently we have no data on the accessibility of the City.
Castel Ritaldi
Avenue Martyrs of the Resistance, 1 – Castel Ritaldi (Pg) – Such. 0743-252811 Certified mail: comune.castelritaldi @ postacert.umbria.it – Mail: info@comune.castel-ritaldi.pg.it
Picture Source: http://www.castelritaldi.eu/home.aspx