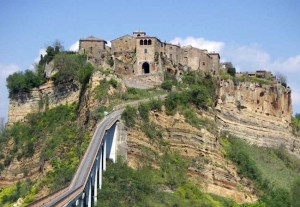 If you want to visit Umbria we recommend Castel Giorgio (2228 from, 559 m) is a picturesque village surrounded by a `natural area of ​​great interest: in the South Lago di Bolsena, in North West Monte Amiata, the nearby waterfalls of the river Romealla and the hill of stones thrown.

For the primitive Etruscan settlements built over a subsequent Roman colonization. Took its name from Castle that the Bishop of Orvieto Giorgio della Rovere he built as a private residence in 1477; the history of the village is intimately connected to the hardships of the Castle, which was first destroyed during fighting between the families of Della Rovere and Valenti, then suffered a fire and an earthquake, and was finally fully restored by Cardinal Giacomo Sannesio, in 1620. The Cardinal turned it into an elegant palace for the vacation of prelates and cardinals, but the residence was also used to seal the Peace of Castro (1642), while the thick forests of the district offered refuge and asylum in the notorious brigands like David Biscarini from Marsciano e Luciano Fioravanti da Viterbo.
Things to see, besides Palace Sannesio, the Parish, the Town Hall, village Pecorone, the Building of Montiolo, Hillock of Tower, the villa of Bean, the villa of Pisana house and the Castle of Montalfina built by the Lombard king Desiderius in the eighth century `.
Numerous natural attractions, in particular the Natural Park of S.T.I.N.A, inside which is placed Castel Giorgio.
Castel Giorgio
Town Hall Square no. 1
05013 GEORGE CASTLE - TR
Such. 0763/627013 – 627093 – FAX : 0763/627157
Currently we have no data on the accessibility of the town.
Source of the image: www.castelgiorgio.com