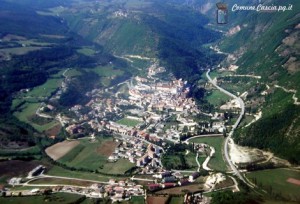 Cascia is a small village in Valnerina of pre-Roman origins. A witness to the vitality and of the importance of Cascia in pre-Roman and Roman remains still visible signs, Archaeological finds have occurred throughout the: grave, epigraphs, votive, coins, vessels, are, memorial stones.

The Romans colonized the area where he established himself in a massive.
This small rural district, was formed at the foot of the village `current, already with the name of “Pagus Cassianus” the “Cassia” (later became the present set “Cascia”); the district around Santa Maria still remained was the ancient name “payment”.
Pay to the inside of the Roman, inhabited by a population devoted to agriculture and handicraft to, born in Christian times the Church of Santa Maria della Pieve (by rabble-term, that is, common people), implanted between the fourth and sixth centuries, of a pagan temple.
Then there was the colonization of Lombards which together with the Byzantines gave rise to Duchy of Spoleto. For the Lombards in 789 succeeded by Frankish, until, in 962, the emperor Otto I, Holy Roman Emperor, gave the pope a large part of the Nera Valley including the cities of Cascia. . In 1213 became established in the city of the domain Trinci Foligno; in 1260 The Cascia rebelled and drove them, but in the 1265 King Manfred of Swabia occupied again Cascia and the rock.
The city of Santa Rita, is now one of the main spiritual centers of Umbria. The environment in which he lived and worked the Santa was poisoned by disagreements and conflicts of all kinds, by merciless struggles between Guelphs and Ghibellines, by feuds and vendettas individual and collective. The mission “evangelizing” preachers who tried to quell these riots was joined by the activities of so-called “peacemakers”, who pursued the same goal but on a civil level, not religious; Rita's parents also exercised, probably, such activity to Roccaporena, Santa's Christmas village.
In 1569 Pope Pius V (1566 – 1572) established the Prefecture of the Mountain, with whom he formed a new territorial organization that gave a stable order in the territory of Norcia, Cascia, Visso, Cerreto di Spoleto and Monteleone.
The new institution was in existence until 1809, except for two short breaks at the end of the `500 and` 800 at the beginning of. The 28 January 1849 Cascia hosted Giuseppe Garibaldi, of passage in the city, to Rome; `s episode is remembered by two plaques in the main square.
In 1860 the city was annexed by a plebiscite in the nascent Kingdom of Italy.
For information: City of Cascia Piazza Aldo Moro, 3 Such. 075.71147.
Tourist Promotion Valnerina Cascia“, such.0743/71401 – fax: 0743/76630; Information Office: 0743/ 71147.