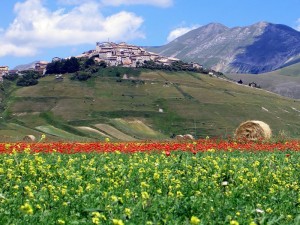 Norcia (m 604) is a small medieval town situated at the foot of Monti Sibillini, at the northern edge of`Plateau St. Scholastica, a fertile valley crossed by the rivers Deaf and Torbidone. Norcia has many environmental resources, artistic, gastronomic and cultural factors that make it attractive and unique in the eyes of visitors. The city already has its first settlements in the Paleolithic and perhaps had contacts with the Etruscan civilization. Became a Roman settlement. In 200 DC became a Christian and then gave birth to characters High-caliber Spiritual, come San Benedetto and St. Scholastica. In 1500 Norcia was established in the prefecture of the mountain. The city was divided into eight zones that corresponded to the number of gates and were administered independently; however, its territory was divided into castles, city, settlements aperti.Nel 1820 was restored the diocese . As the town is surrounded by walls, access is possible only by passing through its 7 door.

The Old Town Norcia is wheelchair accessible, with smooth and flat floor, it is advisable l `companion to access the various artistic and cultural sites.
Noteworthy,in the immediate vicinity, the famous Plans Castelluccio, which form a karst plateau at about 1.500 meters s.l.m., at the foot of Mount Carrier (2500 m s.l.m.) where at the top of a hill lies the village of Castelluccio di Norcia, the highest village of the Umbria-Marche Apennines. In the flat there are several roads and paths, some of which allow walks, better if accompanied and preferably in the summer during which you can admire the beautiful flowering and Abbey Sant'Eutizio splendid example of Romanesque art, which is now also a structure Accessible. The church is accessible as well as the surrounding green area where you can go for a walk even on their own. The Museum annex provides, service visits, educational activities and thematic workshops, special openings on request. Abbey Museum of Sant'Eutizio for information call. 0743.99659 – 0743.231035; fax 074.231036
Parking, three parking in Via Circonvallazione: Parking Porta Romana, Parking Porta Ascolana and parking of Marcite.
Public toilets: There are public toilets in automatic parking above, in the parking lot of Marcite indicates the presence of staff.
Tourist Desk: is located in Piazza San Benedetto under the Town Hall, There is a small step at the entrance. The office is open from 9.00 all 14.00 and from 15.00 all 18.00, such.0743.824962,
turismo@comune.norcia.pg.it
Paving: The center is wheelchair accessible, with smooth and flat floor.
City of Norcia, via Fiume 1 – 06046 Norcia (PG) – Such. 0743.828711 – Fax 0743.824021
[mappress mapid =”79″]