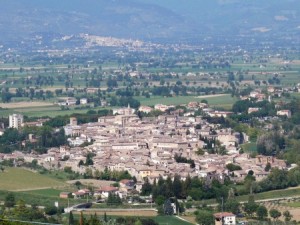 Bevagna was born near the western branch of the Via Flaminia, that ran through almost the entire, giving the urban fabric regularity remained unaltered over the centuries. The ancient “Mevania” (III a. C.- I d. C.) probably covered the area much more extensive than that defined by the city walls; literary sources, documentary, epigraphic and archaeological tell of a city so rich and vivid, surrounded by a noble and fertile countryside. Subsequently, the city declined, Also as a result of the decreasing importance of the western branch of the Flaminia, irrelevant to the Lombard Duchy of satellite Spoleto; the medieval Bevagna reuses still the city walls and urban structure Romans, and at the heart of the monumental axis roads and public plaza, after, the Palazzo dei Consoli, completed in 1270. Arenas within different areas of the city settled community of Franciscans, Dominicans and Augustinians, while in the fifteenth century. was rectified the `riverbed Topino to allow drainage of the plain.

Currently we have no data on the accessibility of the City.