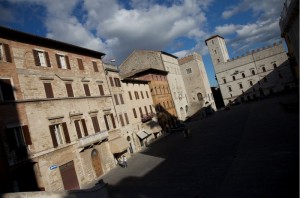 Todi (400 m, 20.116 from.) faces, by a `hill, on Middle Tiber Valley and was described by Professor. Richard S. Levine della Kentucky University, after careful research, the “most livable city in the world”; an enviable record and ensures the beautiful Umbrian town a place of honor in the circuit of “Slow City”. This internationally renowned, recently acquired, has encouraged the flourishing of initiatives to increase tourism `and modernization but has not in any way adversely affect the` intact splendor of the village and its osmotic relationship with the lush countryside of the district.
Its name derives from `Etruscan etymon “tular“, or “border” and this aspect characterizes the city since its founding; Augustan age was ascribed among the conquests of the Roman Empire under the name of Colonia Julia Fida Tuder and was the subject of major works and town planning edlizia.
Free Commune during the Middle Ages, Todi lives the moment of maximum splendor between the thirteenth and fourteenth centuries, when, in addition to Cathedral and the superb Church of San Fortunato, are erected three buildings representing different public authorities and especially starting a `unprecedented urban expansion, with the creation novo villages of four symmetrically arranged with respect to the central core, strongly desired by the craft guilds and the city's commercial.
In the Renaissance Todi was annexed, like many Umbrian towns, Papal State experienced a further phase of urban renewal thanks to Bishop Angelo Cesi (1566-1606).
A Todi Giuseppe Garibaldi fled after the fall of the Roman Republic, while in the early years of the twentieth century were made other development the main entrance of the city and on the steps of San Fortunato.
Todi is the birthplace of Jacopone de’ Benedetti (better known as Tod gives Jacoponei), immortal author of thirteenth-century praise religious, and hosts dall'1987, at the turn of August and September, the important theater festival TodiFestival and one of the most prestigious exhibitions-antiques market in the world.
Comune di Todi Piazza del Popolo 29/30 06059 Todi (Pg) Switchboard 075 89561