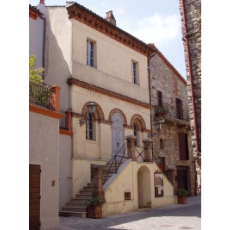 Monte Castello di Vibio, defined “the lost paradise” From the famous anthropologist maericana Sydel Silverman in his essay “Three bells of civilization”, is located on top of a hill 422 m. s.l.m., and from here you can admire a unique view of the Umbrian hills, constantly changing shades of green and the Tiber flowing meandering valley.

Il toponimo trae origine dalla “gens Vibia” Roman, although there is no doubt that traces of civilization in this area date back to centuries before.
Mount Castle still preserves the typical structure of “castrum” medieval; detected and its position as dominant over the river made it a prize catch from the nearby Todi, several times to put the village on fire. Became part of the territory of Todi, its fortress was rebuilt in 1323 and was integrated into a defense system headed by a warden appointed Todina.
In 1409 it settles the rule of the Acts, with the support of the Pope `, to 1464, year in which Mount Castle passes under the direct rule of the Church, grants in the vicarage in Todi; ew and bloody attempts to light up, then turned the inhabitants of the small castle and Todi, which, After various adventures, bought back the House in the Apostolic 1565.
During the Napoleonic Castle Mountain experienced the greatest splendor and , between 1807 ecause 1808, gave birth to the beautiful Concordia Theatre.
Monte Castello became common to all intents and purposes after the second papal restoration, in 1814.
The dominant position of the Tiber valley highlights the perfectly preserved city walls and the urban structure, basat of a dense network of streets connected and interesting examples of medieval houses and Renaissance.
Things to see, around, the fraction of Doglio.
Comune di Monte Castello di Vibio – Via Biancherini 4 06057 Monte Castello di Vibio PG tel. 075/8780217
fax 075/8796135