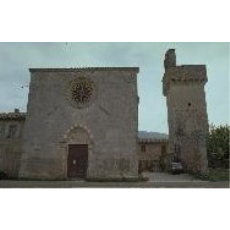 Massa Martana (3839 from, 351 m) is placed at the foot of Martani Mountains, in a wooded area where he leads the maquis you can find ancient fossils, testimony of the time when the area was completely submerged by Lago Tiberino. While not presenting these mountains considerable heights, offer one of the largest natural landscapes across the region: you can see the whole chain of the Umbrian, Mount Subasio, The mountainous terrain of Valnerina, up to the Monte Terminillo, Lazio.

The origin of the city is linked to the attainment of Via Flaminia, of which “Statio ad Martis” was a real coaching and rest, to become a household stable and structured, as the “Vicus Martis“.
Become Civitas Martana, It was the birthplace of many saints (from San Felice San Terenzio), and later became part of the territories of influence of the Lombard Duchy of Spoleto; to these, in the tenth century or the Arnolfi, right to build a “castrum” called Mass, which was walled in 1094. The castle remained available to Noble Mass and was later enlarged and fortified by Bentivegna, Bishop of Todi; became part of the domains of Todi, from which gained independence only in 1565. After the plebiscite for admission to the Kingdom of Italy took the final name of Massa Martana.
The surroundings of the Massa are rich in monuments and places to visit, beginning with Viepri, with its Castle and the Abbey (for info: 075.889371), Bridge Fonnaia, ingenious work of roads built by the Romans in 220 a.C., the Christian catacombs (guided tours by appointment, such 075.889371), the Castle Colpetrazzo and Castle Montignano.
Town of Massa Martana – Via Mazzini, 3 – Massa Martana (Pg) – Such. 075.895171 – Fax 075.889109