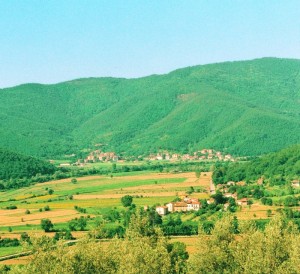 In it`is a Special Area of ​​unspoiled scenic beauty, but also of great archaeological importance, among woods and oak trees, does show itself, the village of Lisciano Niccone (314 m, 657 from), who it was one of the twelfth to the fourteenth century, a small but significant stronghold. Of medieval origin, he head to Perugia for a long time, sin dal 1202, and it belonged to the Marquis of Mt.. After the brief rule of the Casali family of Cortona,Lisciano Niccone returned under the papal government in 1479 and he remained there until 1861, when it was joined to the Kingdom of Italy. On its municipal area are the ruins of a castle and a church – both dell`XI century- dedicated to St. Thomas the Apostle. Also it belonged to the Marquis of Sorbello, the old castle remain today only a few ruins, its imposing trace remains in the stone lintels, in exhibitions and in the quaint brick tower circolare.Qui was based on common, before being transferred to downstream. In Val di Rose, near the hamlet of Crocicchie, there is the Church of S.Niccolò which houses an altarpiece painted school raffaelliana, around 1515, Eusebio di San Giorgio.