Fortress of the Lion 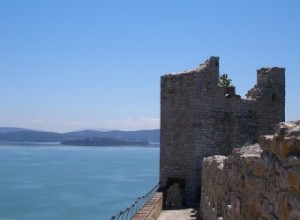 The huge construction formed by a wall embattled polygonal Guelph, four towers and the triangular tower was for centuries the most important military settlement on the shore of Lake Trasimeno. It was begun in the twelfth century on the ruins of an earlier fortress destroyed in 1091 da Enrico IV (1050-1106) Franconia. In 1297 the judges decided to fortify the town of Perugia and the following year they decided to build a castle in the castle to better defend residents. In the fourteenth century saw the intervention of Friar Elia Coppi da Cortona and the Sienese architect Lorenzo Maitani (1325). In 1375, together with Piegaro, Panicale e Paciano, was given in fief by Emperor Charles IV of Luxembourg (1316-78) Beaufort to William, nephew of Clement VI (Peter Roger. 1342-52) and brother of Gregory XI (Peter Roger de Beaufort, 1370-78); quest’ultimo conosceva bene l’Umbria per aver studiato presso l’Università di Perugia in 1349 under the guidance of Baldo degli Ubaldi. After ups and downs, in 1501, Giampaolo Baglioni will take up residence in 1503, providing to restore and expand the complex; Work also continued under his son Malatesta Baglioni and IV were completed by Ascanio Of The Corgna (1516-71) which, shortly before his death, improved the old statutes, which remained in force until the eighteenth century. I replaced it in Ascanio 1554 some cylindrical towers of the fortress with ramparts providing even inside the walls to create a series of formal gardens. He raised, appears on a design by Jacopo Barozzi said Pignola, The mansion now houses the Town Hall, expanding and renovating buildings fourteenth. Diomede I (The adopted son of Ascanio) did his palace in Castiglione del Lago, a true literary salon, called The Gardens of Maecenas. In The Diomede II was succeeded by his son Ascanius (1571-1606) he called to court Cesare Caporali (1531-1601) with the task of composing a few poems in his honor; Francesca Sforza, with whom he had married Fulvio II, Federico, Fabio (painter), Diomede II (bishop) and Artemizia. In possession of Castiglione del Lago took over then the eldest son Fulvio II (1589­ 1647), The fortress, after the death of Fulvio II, came under the jurisdiction of the Apostolic Chamber and 1860 the town of Castiglione del Lago. Refers Alberto Grohmann: “In the urban based on a checkerboard pattern, form a square base with a repeated six times, can be traced clearly the number 3. The town, in fact, three squares, three main roads, be is, and also keep the tower has a triangular”.

not currently have this data for information call the numbers above