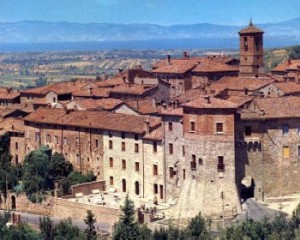 Paciano is a municipality that does not reach the 1000 people, situated on a spur of the Monte Petrarvella (m 391) and inserted at the inside of the circuit “I Borghi più belli d`Italia“. Surrounded by enchanting nature, The village retains `s original medieval structure (fortification walls, road axis tripartite, six towers and three gates: Porta Fiorentina, Porta Porta Perugina and Rastrella).The old settlement upstream trace remains in the ruins of the so-called Torre d `Orlando, while interesting architectural examples, later, are Palazzo Cennini and Palazzo Baldeschi, headquarters Natural History Museum.In the urban center you can admire numerous churches: the oldest is the so-called Church Inside (or S. Joseph), which preserves an ancient banner municipal executed in the studio of Bonfigli, poi la Church of St. Charles Borromeo, enhanced by a beautiful seventeenth-century portal; before the Porta Fiorentina is the homonymous Pieve, prior to the year 1000. Also of interest are the Church of Our Lady of the Star, built in 1572 to celebrate the miraculous passage of a star above the image of Mary and the Museum of the Confraternity of the Blessed Sacrament, which houses many religious works, including a large fresco depicting the Crucifixion of the painter Francesco Nicolò di Città della Pieve, statues and relics of `500 containing the bones of the early martyrs, vestments and the Gospels, and interesting Etruscan territory attiguo.Nei found in the surroundings you will find the Shrine of Our Lady of the Star and the church of San Salvatore.

Image taken from the site www.settemuse.it