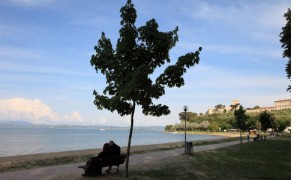 Urban hub of the west bank of Lake Trasimeno Castiglione del Lago is (304 m, 15.504 from.), that at the beginning was an island, then joined to the mainland following the draining of the lake water at that point.

The formation of the city dates from the thirteenth century, when it was built Castle and was started planning real, centered on a simple road system to the inside walls of the rectangular, which is also detectable in a subsequent intervention of Lorenzo Maitani (1325). Castiglione later evolved into a Duchy of Della Corgna, by Pope Julius III, who was related to the family; Della Corgna (1550-1643), in particular Ascanio, deeply changed the face of the city's urban putting into practice the dictates of the classical canon theorized in those years by Vignola, the great architect working in Rome area. Was erected Building that, with Castle medieval, occupied half of the perimeter wall, while in the country was encouraged intensive cultivation of vines and olive groves, still documented by numerous timbered houses with tower.
Castiglione is now required,for quite soggirno in Umbria with the beauty of its high walls, as an almost intact medieval village and as a modern tourist center, equipped with a navigation service that connects it all `Isola Maggiore.
Currently we have no data on the accessibility of the City.
Town of Castiglione del Lago. Piazza Gramsci, 1, Castiglione del Lago 06061 Such. +39 075 96581 urp@comune.castiglione-del-lago.pg.it