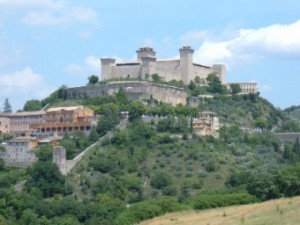 Perched on top of St. Elijah Hill si trova il simbolo stesso della città, his monument, perhaps the most famous and unmistakable: the Rocca Albornoz. The fortress was built by Cardinal Albornoz from 1359 per volere di Papa Innocenzo VI, allo scopo di rafforzare il sistema difensivo e di controllo dello Stato Pontificio sui suoi vasti e riottosi domini in territorio Spoleto. The powerful structure, by Matthew Gattaponi, hinges around two magnificent courtyards of Honor and Arms, and in a complex system of angular towers joined together by high defensive walls.
The fortress was the seat of the Papal Representatives sent up to the eighteenth century and its walls accommodated members of the Medici family, Visconti, Of Oak, Aldobrandini and even Lucretia Borgia. In 1817 became a prison of the Papal States, and maintained its character as a prison, even after the unification of Italy, to 1983.
The long and extensive restoration work in it allowed to bring to light areas of great charm, as the so-called “Camera Pint“, a room, included in the main tower, adorned with a series of paintings of subject and courteous knight of the most interesting of central.
Source images: Photo www.regione.umbria.it: M. Tortoioli 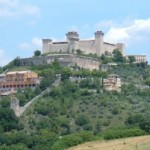 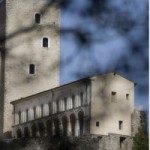