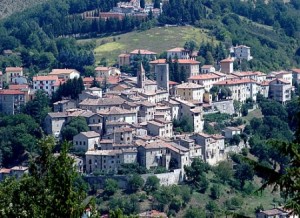 Pietralunga (566 m) It is set in a large and valuable forest, dominating the valley of the Carpinella. The area was already inhabited in Roman times, as evidenced by some archaeological findings , including a rustic villa with a mosaic floor, dated between the third and fourth centuries d.C.

The village, equipped with a fortress and walls restored at the end of the sixteenth century, It was from the orbit of the Middle Ages castle town.
In the sixteenth century it became part of the Papal State until 1860, year of birth of the Kingdom of Italy. The village can also be considered a port of privileged access to the park Monte Cucco. The village is accessible with assistance.
Parking: are two, one on the right side of Via Marconi, the other in Piazza Fiorucci.
Public toilets: There are no toilets accessible to wheelchair users.
Tour desk: It is located within the City, accessible to everyone because at street level. Open from Monday to Friday 10-12. Such. 075.9460721
Signage for the blind: not present.
City of Pietralunga -square Fiorucci, 1 – Cap. 06026 – Such. 075.9460721 – Fax 075.9460722
Tourist Information Office of the district Upper Tiber Valley
Piazza Matteotti – Lodges Bufalini
06012 Town of Castle
Such. 0758554922 – Fax 0758552100
info@iat.citta-di-castello.pg.it
[mappress mapid =”82″]