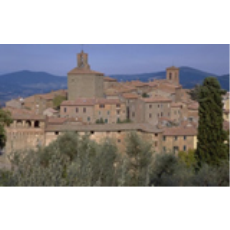 The village of Panicale, Beauty of a prim and placid, was once one of the most feared and fortified castles, so much to be captured, then become part of the dominions of the Church, only 1643.
The village (m 538, from 5741) It stands on a hill overlooking the lake Trasimeno and the valley crossed by the river Nestor.
The historical center preserves the structure of the ancient, delimited by two doors and focused on three squares located at different levels, and offers a series of architectural gems: the Church of Our Lady of the Bar (built in 1625 and which owes its name to the customs house at which the toll rose), the Church of Sant `Agostino, containing frescoes of the sixteenth and seventeenth century and a beautiful stone altar Giovanbattista of Christopher da Cortona, the tiny Theatre “Cesare Caporali”, The Baroque Collegiate Church of St. Michael Arcangelthe, which houses a fresco attributed to Masolino, and Palazzo del Podesta, fourteenth-century building with a single and mullioned windows and a tall bell tower.
Panicale Via Vannucci, 1, 06064 Panipat (PG) Such. +39 075 837951 Fax +39 075 837637
Tourist Information Office of the district Trasimeno
Piazza Mazzini, 10 – 06061 Castiglione del Lago
Such. 0759652484 / 0759652738 – Fax 0759652763
info@iat.castiglione-del-lago.pg.it
Source immaginehttp://www.conoscerelumbria.regioneumbria.eu
[mappress mapid =”38″]