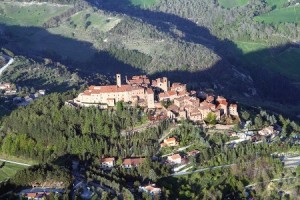 The ancient village of Monte Santa Maria Tiberina is perched on a hill, on the border with Tuscany region, overlooking the fertile plain of the river solcatab Aggia, tributary of the Tiber. The country became, in the middle of the thirteenth century, stronghold of the Marquis Del Monte, awarded by French monarchs of the surname Bourbon. The family imprinted his signature on the building structure, with the palaces and the castle.