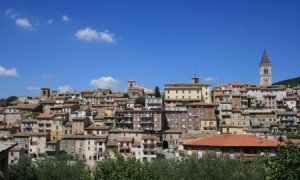 Gualdo Tadino (m 536, from 15.834) rises on the Colle Sant `Angelo, dominated by Rocca Flea, on the border with the Marches. The two names are a true reflection of the tormented history of the town, who saw born and rise more than once. A primitive settlement “Tadinates”, hated and vilified by the neighboring Eugubini, had settled on the hill “I Mori”; in Roman times we find instead “Tadinium” in pianura, along the route of the Via Flaminia, the place where the king of the Goths Totila was defeated by Narses; after the year one thousand, finally, the community moved near the stream Leto, Benedictine core becomes powerful and respected, and assumes the name Lombard “Forest” , or “forest”, “forest”.

I “Tadinati” lived a long period of prosperity thanks to the protection of the powerful Abbey S. Blessed but were forced, the early thirteenth century, to move for the umpteenth time `, because this time of a fire, in the place where now stands the village and where the Benedictines moved by founding a new building abbaziale.Gualdo Tadino evolved to a free city under the protection of Frederick II in the thirteenth century and was equipped with walls and a fortress. The urban fabric is still the original, derivation of medieval, while many buildings were rebuilt after the earthquake of 1751 and 1832.Gualdo Tadino is an active manufacturing center specializing in the production of ceramic art to shine in gold and ruby. For the age-old tradition of ceramics, adheres to the city `Italian Association of Ceramics Town, national brand “Artistic and traditional ceramics”.The town is quite smooth and easier for people in wheelchairs, thanks to the reconstruction of the pavement following the work of restructuring post-earthquake.
Parking: accessible in the large park in the square ex Maravelli Gardens and Piazza Mazzini.
Public Restrooms: at the exit of the elevator that takes in Piazza former Orti Maravelli. Verify its opening by asking in advance all `Infopoints.
Paving: the city has been recently repaved. Corso Piave is presented on a slight slope and pavement with stone and brick.
Tourist Desk: is located in front of the Town Hall, at the inside of a former pharmacy `. Open Tuesday and Thursday from 10 all 12 and from 14.30 all 18; Friday and Sunday from 10.30 all 13 and from 14.30 all 18. Is accessible to all as a street plan.
Signage for the blind: not present.
Comune Di Gualdo Tadino – Martyrs Square of Liberty, 4 – 06023 Gualdo Tadino (PG) – Such. 075-915021
[mappress mapid =”69″]