Shrine of Our Lady of Grace Rasiglia 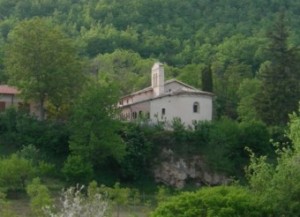 Located about one kilometer from the village of Rasiglia, in the upper valley of Menotre.

Its foundation dates back to 15 August 1450, when the parish priest of Rasiglia obtained by the Bishop of Foligno to erect a church to be entitled to the Virgin Maragone, near the ditch Terminara, where it was discovered a terracotta statue of the Madonna and Child, found beyond the boundaries of the parish of Rasiglia, in the area of ​​jurisdiction of the Diocese of Spoleto (which provoked arguments among Rasiglia and nearby Verchiano).

The sanctuary, dell'anfratto constructed beyond the rock where the statue would have been detected, was first given the nickname "Our Lady of Mercy" and later, because of the favors received by the population during the period of the plague, to "Our Lady of Grace".

On the main facade and left side of the sanctuary stands a portico under which fairs were held during festivals and processions.

The church, to an aisle, presents a rectangular shape and one altar above which is placed the image of the Madonna. The crypt is the terracotta statue depicting the Virgin Adoring the Child on her knees which was dedicated to the worship 700, when the statue was replaced with wood, above the altar.

The walls of the shrine are covered with votive frescoes different, attributable to the masters of the fifteenth century Foligno. The oldest fresco, dated 1454 is placed as the last on the right wall, representing Our Lady of Mercy who protects the faithful from the plague.

Worthy of note are several frescoes: the angel of peace who attends two warriors who embrace, at the center of the left wall, attributed to Bartolomeo di Tommaso; S. Sebastian, S. Friend of Rambona, S. Antonio Abate, S. Peter, S. Lucia, S. Nicholas of Tolentino and S. Gotthard and S. Christopher, above the inlet port.

On the right of the sacristy is located, from which we reach the "Hermit's House", Sanctuary custode. On the right side of the church is the "Saletta hermit", built by the hermit Giuliani in fifth 1938, which presents a series of columns with light windows in cooked supported by a base in the form of elephant.

The bell tower that dominates the Saletta is sailing, with two arched windows and two small bells, placeable in the early 1600.

Released by Saletta, you through what once was the '"garden of the hermit" and extends to the "Casa del Pellegrino" or "Youth House", started in 1956 the will of Don Pietro Corradi and completed in 1975. The property has over fifty beds, is home to retreats and summer holiday destination for many groups of young.

And 'possible to park your car in the square in front of the sanctuary, paved with gravel and pebble. The internal step entry with a height of cm 6. The nave is open without difficulty, while to get to the crypt, which has an entrance behind the altar, There are about ten steps. Next to the sanctuary is a welcome center with rooms that have accessible toilets, but not equipped for disabled; to use the keys you need to ask the custodian of the structure. 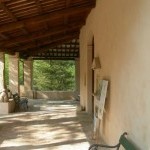 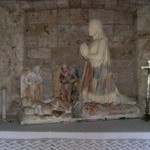 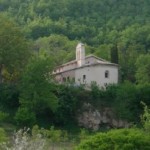 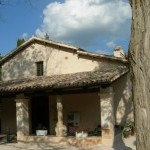