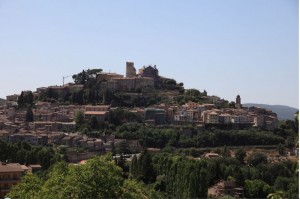 Amelia (406 m 12.077 from.) is a city of ancient origins, perched, to the inside walls of a powerful pre-Roman, sulla sommità di un colle tra le valli del Tevere e del Nera adatta per i tuoi viaggi in Umbria. The extraordinary originality and persistence of `urban settlement, valuable artistic and architectural (from the Romanesque period to the eighteenth century), the majesty of the palaces, the splendor of the surrounding countryside make it one of the most precious gems of our region.
Founded (according to the testimony of Cato) in 1134 a.C. was surrounded by monumental polygonal walls in the third century BC. Fu un Ricco municipio novel, in an area dotted with villas and fertile agricultural.
Sacked by the Goths under Totila, became a free city and 1307 he submitted to the Papal.

Parking: Square in September XXI.
Public toilets: we are in the Palace in which there is the Cloister Boccarini and another in the Museum of Archaeology.

Paving: Amelia as most of the medieval villages shows considerable ascents and stairways, Whether in the cobblestones, it is recommended that the accompanying.