Sanctuary of Our Lady of the Star 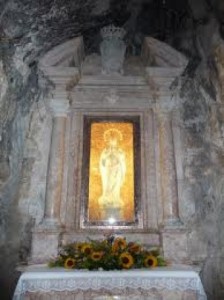 The sanctuary of Our Lady of the Star was built in 1862-81 designed by Giovanni Santini after an event considered miraculous, ie in the early months of 1862, Our Lady appeared to a five year old boy, Federico (Righetto) Cionci, who had left the house to have fun around the church. He hears himself called, approaches and sees the painting come to life, bathed in a golden light. Madonna appears that takes you by the hand and tells him: "Righetto, be good ". Madonna will appear to him several times. The fact is candidly told the child to anyone who asks. Outside the church there is a bronze memorial statue of the child. The sanctuary is surrounded by greenery and you can eat in the small wood next to the church. The interior has three naves with a clearly Renaissance.

The Sanctuary is accessible to disabled.