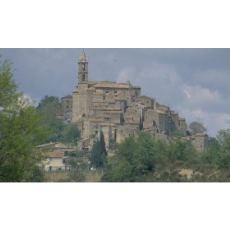 Basque (165 m, 2742 from) Common is one of the oldest and most enduring of Italy, whose foundation is , the late ninth century, Ugolino or Galino of Biscay, Journal of Charlemagne, of reward for services rendered in battle gave him a “Castrum Vetus” on the banks of the Tiber; Here Ugolino of Biscay, say “the Basque”, erected a new castle, which they called the Basque, by his nickname.
The Basque family, among the most powerful center of Italy, had on over the domain 60 castles in the area and established, about 3 kilometers from the castle of the Basque Teverina, a large fortress with a castle, where magnificent and imposing headquarters of the noble family residential. This stronghold, private property and reduced to ruins, Carnano is located in the resort village in the town of Tong Montecchio.
The remarkable parish church of St. Nicholas is a precious polyptych by Giovanni di Paolo, which depicts Saint James of Compostella, Enthroned Madonna and Child with Angels, St. Nicholas and, in the cusps, Annunciation and Christ Blessing (1440); There are also paintings of Andrew and Peter Paul Polinori Sensini.

There are currently no information come sull'acceassibilità the City.